This month, we are featuring the recently released ‘Welfare Report on Disability services of Korea.' As the responsibilities of Programs for persons with disabilities has been changed from the Central Government to Regional Governments since 2005, it could derive the gap of services between the regions. In that sense, we have been researching the disability services annually to lessen the gap between the regions and promote the balanced development.

According to the World Report on Disability of WHO, Robust evidence helps to make well-informed decisions about disability policies and programs. In the context, data is in accordance with the robust evidence.

As the regional governments are responsible for the services for persons with disabilities since 2005, we have been researching the disability services of Korea annually to lessen the possible gap between the regions. This given result can be used to learn the current status of the provided services of the regions, and use as a baseline for policy suggestion.

The research targeting the 17 regions of Korea from March to November 2017 by Dongseok Lee, the chief of Committee on Policy of KODAF, and two researchers within the collaboration of KODAF.

The data were provided by the Government sector and collecting from the given data from the Public sector. However, we modified the baseline-data of Jeonlado to the given data due to their noncooperation. The baseline data for Jenlado has consisted of central division and the Congress.

The index consisted of 49 indexes, which is adaptable to the 17 regions. The detailed index for the welfare sphere is as the following. Education; income and financial activities support; health and Independent Living support; welfare service support; access to mobility (appropriate accommodation), culture and leisure, ICT; budget and administration for welfare; good practice on welfare programs for persons with disabilities. The indexes mentioned above were partially corrected or complemented, clarified compared to the index of 2016's research. 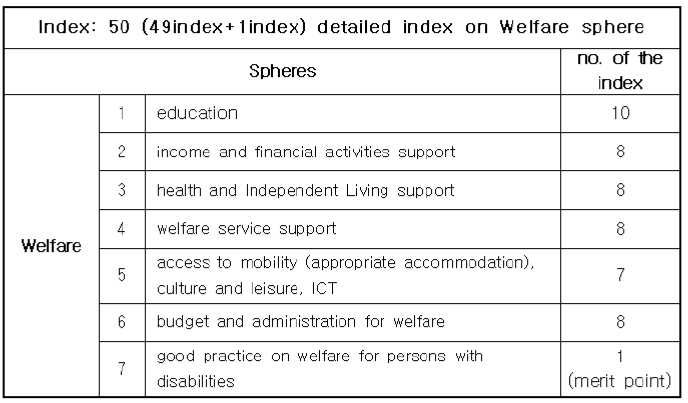 <Feature 1. Consist of Index on Welfare>﻿

< Feature 2. Chart on the Average Score and Category of the result >

The average score of education sphere is 67.84. Compared to the past three years, it shows that the average score has been decreasing from 2014 to 2016, and increasing again in 2017. Thus the gap between the highest and lowest score has been severe for two years until it lessened the difference of the scores in 2017.

< Feature 4. Infographic of the education sphere >

On the contrary to Ulsan, while being in the ‘Excellent zone (green)' for five years, Seoul stayed in ‘Need to improve zone (red).' It is evident that Seoul city needs to endeavor its educational sphere. Even though it has increased 2.69, the three cities (Chungbuk, Gyeongnam, Jeonnam) has decreased incredibly in comparison to the last year. It shows that newly added index such as the ‘rate of recruiting quota of special education teacher,' ‘placement of special education assistant' has influenced the result.

Within the result, we could evaluate the current status and services to improve the regional welfare service of South Korea. This data was especially meaningful as the Government sector provided the data within its cooperation. We look forward to the balanced development and the lessened gap between the regions.