On April 17th and April 18th 2018 I have participated to the International Disability Employment Forum which took place at the Glad Hotel next to the E-Room Center in Seoul.

I attended Session 1 and Session 3 of the Forum. On the first day, there were 3 speakers from 3 different countries: Yuichiro Nakamura from Japan (Director of the Employment Measures for PWD Division, Ministry of Health, Labour and Welfare), Christelle de Batz from France (Secretary General of FIPHFP) and Kyoung Seon Kim from South Korea (Director General of the Korea Ministry of Employment and Labour Bureau for Human Resources Policy in Aged Society).

Each representative exposed their existing country’s legislation, the current and future measures and strategies to support employers and Persons with Disabilities.

The different topics tackled by the three representatives were:

- Japan: Current Status and Issues of Employment Measures for Persons with Disabilities.

- South Korea: A job market for all: Policy directions for recruiting persons with disabilities.

It was very interesting to have different point of views and to see how a country system can differ from another. It was the first time I participated to this kind of Forum and I didn’t know much about the topic. Thus, I have learnt a lot of information and I could point out some differences between the information exposed. I also became aware of the different challenges regarding the employment of PWD. 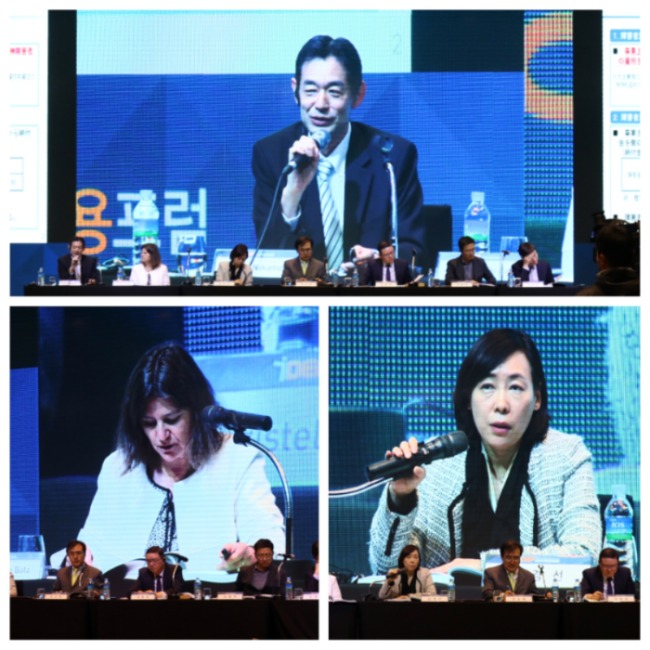 What I appreciated about this session is its concrete aspect. Indeed, the two speakers used videos and different cases of awareness campaigns which were great to illustrate actions which are taken in each country. Moreover, this day two experts were invited to ask questions related to the two speeches at the end of the presentations.

I thought it was bringing a more interesting dimension to the Forum. Indeed, the first expert, gave interesting figures exposing the different issues related to Persons with Disabilities in South Korea such as discrimination, job security, the lack of respect of the employment mandatory measure. He brought the idea of a discrimination index aiming at improving respect of regulation measures. Moreover, he said that both French and E-Mart actions could actually be inspiring solutions to these issues.

The second expert had questions regarding the evolution of the 6% quota of Persons with Disabilities French companies have to hire. Last but not least, the E-Mart’s HRD Manager talked about ‘Handicafe’, a more casual recruiting system set up by the FIPHFP to facilitate meetings between employers and Persons with Disabilities looking for a job. He wanted to know if persons holding these meetings were qualified persons or volunteers. He also wanted to know how E-Mart had increased the number of persons with disabilities hired in one year, to better understand key factors.

As a result, this forum in my opinion opened an interesting debate and line of thoughts which I hope will lead to the improvement of professional insertion of Persons with Disabilities and the establishment of new measures.