KODAF and SK Telecom were organizing a two day event for Youth with Disabilities from May 9th to May 10th at the Hwajeong Gymnasium at Korea University. The goal of the event was to introduce and promote understanding of Information and Communications Technology to Youth with Disabilities through competition and participation to different activities such as Olympic competitions, VR experience, smart cars, Nintendo Wii.

Among participants, 28 teams represented different schools, from middle schools to universities. Each team was composed of 3 Students with Disabilities and one teacher.

I thought that the concept was great and playful to discover ICT. Moreover, the event is hold every year since 2007 and some teams have been participating several time. It shows its success among Students with Disabilities.

The first day started with the Design Olympic: several smart cars were exposed with a unique design and the creator had to describe what he wanted to represent, the message behind its project. A group of judges had to evaluate on different criteria which was the most creative project. Every smart car was unique and I was impressed by the quality and originality of the design. I especially noticed two cars representing peace between North and South Korea which was touching. The car was like a symbol of peace. Another car design was more personal as the driver was the creator. It focused more on her personality; she also played harmonica which added originality to her project. 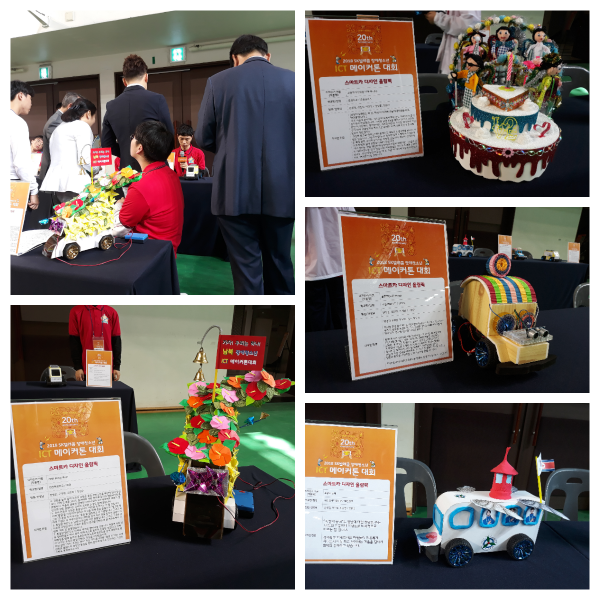 The second activity was the Making Olympic. Everyone had forty minutes to assemble spare parts and build a smart car (Arduino technology). When a car is finished students can drive it thanks to an app on their phone so it is a connected object. I thought it was very challenging as any basis was prepared, they had to assemble from scratch small pieces together with the help of an instruction support (Smart Car Manual) and their teacher but the limited time made it even more difficult. Then, they had to make sure their car was correctly working to be able to participate to the next activity. 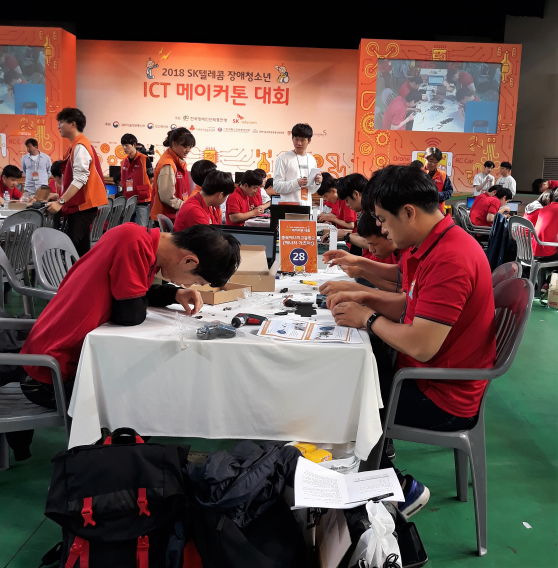 For the Pushing Olympic, two blocks were disposed to welcome four teams and on each block, two opposite teams. Participants had previously randomly picked up by draw their opponents. The objective of this competition was to push as many cubes as possible of different size to the opposite side with the smart cars in 6 minutes. For that, students slightly modified their car adding a sort of shield made with straws, chopsticks, plastic spoons etc. The difficulty of this activity was to be rapid and handle with dexterity the car with the app. Some ‘car accident’ often happened where cars got trapped and couldn’t continue pushing cubes. As a result it required a good strategy and a good mastery of the app.

The Racing Olympic was the next activity: a track was settled with different fences and obstacles and always on limited time, students had to drive their smart car until the final line before their opponents. Again, this competition was difficult because of the time

(40 minutes) and the form of obstacles (transparent barriers, stones etc). A lot of cars got trapped because of that and other were surprisingly fast in roaming the track.

Last but not least, on the back of the gymnasium a facility was settled to welcome the Drone Olympic. It consisted in succeeding orienting a drone through circles similar to Paralympics symbols until the finishing line; probably one of the most difficult contests in my opinion.

The second day let more time for speeches, dancing and music shows. There were also other pushing, racing and drone contests where winners from the first day competed to be finalists.

From my point of view, this two-day program was innovative and successful. The chain of events was great and ‘in between’ performances entertaining. It enabled students to have some rest after the difficult and tiring competitions.

Above all, it was quite impressive to see capacities of students with disabilities considering the level of difficulty of the contests. Moreover, I was personally surprised to see how talented blind and deaf students at the drone contest were which was in my opinion one of the most difficult activities. It proves that I and a lot of people sometimes misunderstand this type of disabilities. Another important element to highlight is that students were competing by category of disability: it means that any groups were disadvantaged.

Besides that, although the first day was the longest and most tiring each team kept being enthusiastic and there was even a better motivation and interest on the second day.

Everything in this event is a way for Youth with Disabilities to well understand ICT and what will make our future society. It can lead them to job ideas and they can find new center of interest.

Students with Disabilities can take advantage of this event to learn something about themselves or about their environment, and be comforted to fulfill their dreams.