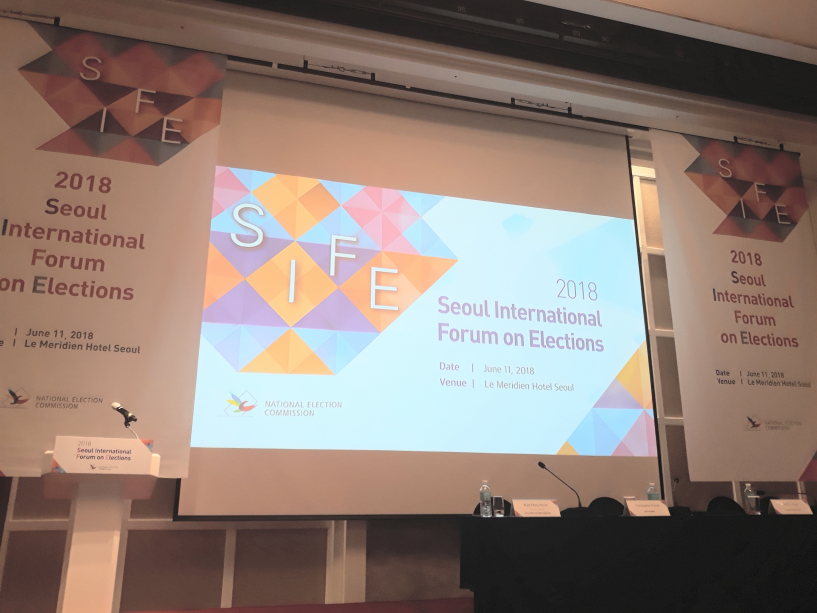 On June 11th (Mon) at Le Meridien Hotel took place the Seoul International Forum on Elections hosted by the National Election Commission of the Republic of Korea. It is an annual international conference which aims at gathering experts in the field of elections and democracy in order to take actions in improving the election system and democracy in the world. Through presentations and discussions, it was the opportunity for the different country representatives to compare and find solutions to elections and democracy challenges also two days before the local elections (Wed 13th).

Thus, this day was organized in 3 sessions:

Session One: “Measures to Expand Participation in Elections by social Marginalized Groups”

Session Two: “Fake News: the Effects on Elections and the Measures to prevent it.”

Session Three: “Ways to promote Cooperation between Election-related Organizations from Around the World.”

The goal of the first session was to expose measures settled by international organizations and election bodies to ensure the protection of vulnerable groups and socially marginalized groups and make sure their voices are taken into account during elections. 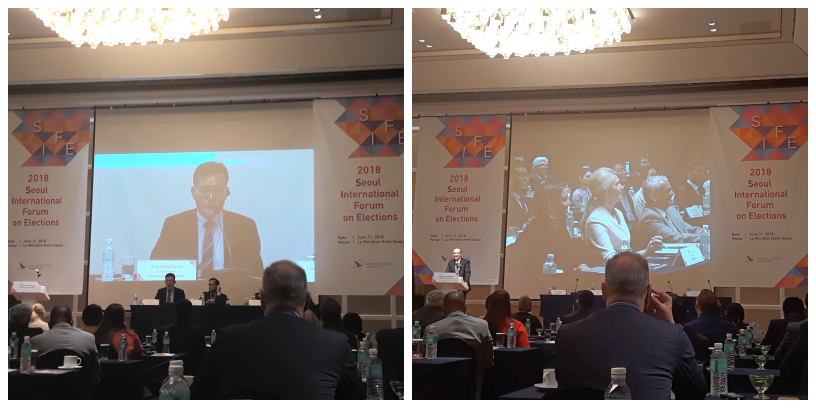 The first presentation was held by Christopher Wyrod, Deputy Country Representative Indonesia, Asia Foundation. He exposed the notion of electoral inclusion and issues and challenges that encounter the different socially marginalized groups about voting. Among them: ethnic and religious groups, Youth and persons with disabilities. He also compared Korea with Indonesia in terms number of voters and turnout, measures to improve access to vote for these kind of groups.

Effective tools to make youth more involved for example are influencers, engagement in specific issues and the most viral is social media. For instance, in Indonesia they created a "hackathon" which consists in a digital platform of advices and tools to help, especially the young community, to know better how to vote and what the purpose is. It became very popular in 2016 and allowed to gather a large part of the young population. It was kind of impressive to see how social media, like twitter can be effective to influence people’s opinion, especially since Presidents themselves are using it regularly.

The second speaker was Jeffrey Karp, Professor at Brunel University London and Senior Research Fellow, Electoral Integrity Project. His presentation “The Challenge of Democracy: Increasing Political Participation While Maintaining Confidence in Elections”, was focused on the problem of low voters turnout. Interesting fact was that factors that encourage people to vote are the convenience and accessibility. Thus, if Election Day is on a national holiday (like it is the case in South Korea), it makes it easier for people to go voting. Also online voting and electronic voting machine are new measures that improve access to vote. On the other hand, voting system and rules can motivate a person to vote or not: for example in the US to identify the voter some states require ID photo others not. This measure can discourage some persons to vote.

The last presentation was held by Laura Villalba, Election Consultant from Latin America. I have to be honest saying that except one example about indigenous people and women inclusion in the Supreme Electoral Tribunal in Bolivia, the whole presentation wasn’t interesting. Adding that her English wasn’t good, her speech was lacking of dynamism. Unfortunately I couldn’t catch key information.

As a consequence, this forum was very interesting to discover. I was surprised by the diversity of the audience: English, Korean and Spanish were the three official languages.

The first session was a good insight on the different practices concerning elections and how different the notion of democracy is following countries. Indeed, because elections don't always equal democracy, (in many African countries, in Russia for example) it is important to face challenges and think about new solutions to improve our own system.

We can hope that this forum would be truly inspirational for the different countries present this day to think about improving the electoral system and make a more democratic world.