This month started with the last summer camp: KB High School Camp. From August 1st to August 3rd we stayed at the Bloomvista in Yangpyeong (양평) to fulfill 3 goals with the students:

The first day started with a presentation of the program and the mentor leaders. Then to get the students involved we started playing a Bingo game. The winner received a gift!

Students had an hour and a half to draw on a band on toilet paper 4 scenes: the happiest moment in my life, a moment of sadness or sorrow, the experience of the greatest deviation in my life (relieving moment) and what I really want to do in the summer camp for 2 nights and 3 days.

The main purpose of this activity was to express itself based on self-understanding and build positive relations with the group members. At the end of each activity, mentors and mentees presented to the rest of the group what they drew and the meaning behind each scenes. 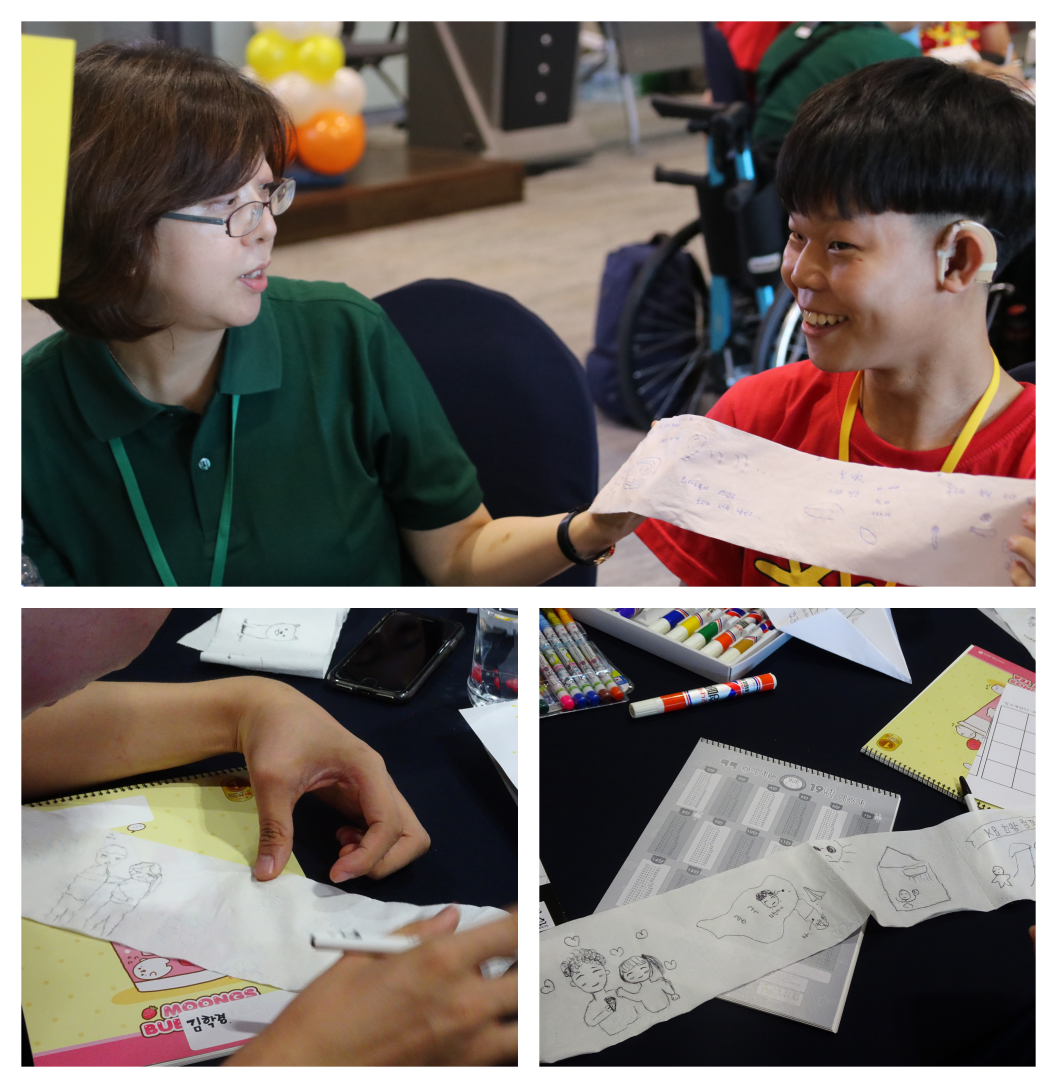 I thought that this activity was really unique as students were using the paper toilet as film roll in cinema. Moreover, drawing added a little challenge and a reason to explain it to the group afterwards. It was a good ice-breaking activity. Whatever the kind of disability mentees had, everyone could participate. For example, if drawing the scenario for each scene was too difficult, students could still write key words on the paper.

This activity aimed at improving capacities to communicate students’ thoughts logically and confidently through 2 to 3 minutes speech lectures. 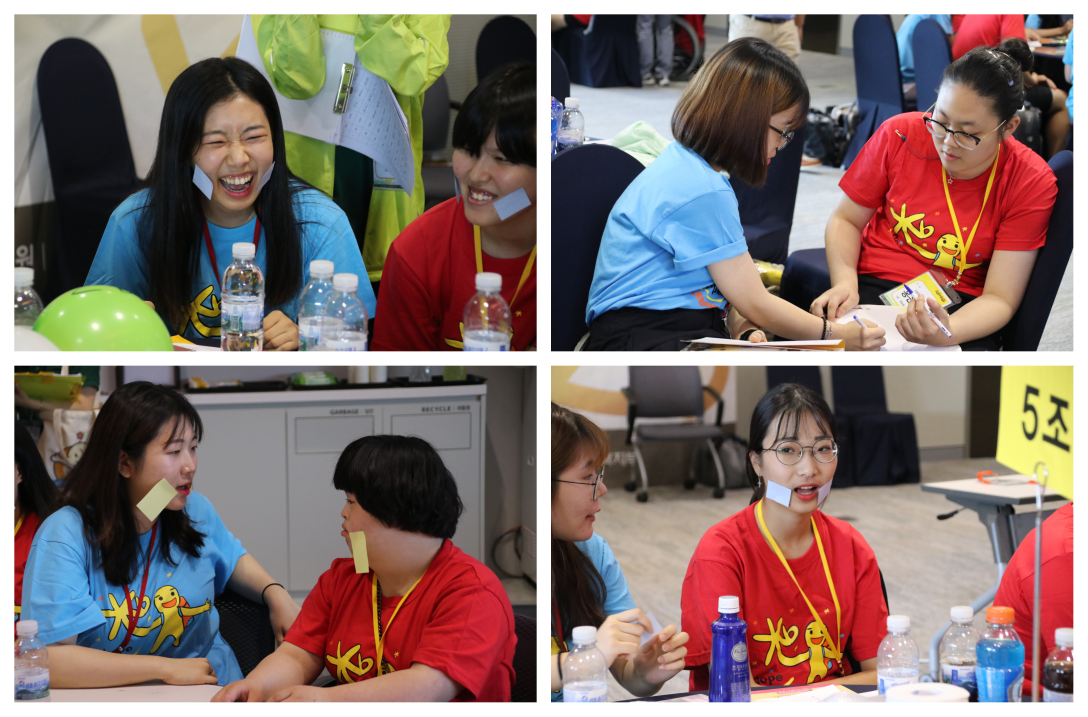 After the diner, it was time for the last activity of the day: “My dream growth diary” (내 꿈 성장일기).

Students had to find out the process and cause about their dream, imagine what will be the point meaning that they will have achieved their future career goals. For that, they had to place themselves in the past, when they had their first idea of dream job, how their idea have evolved in the present and what they imagine it will be in 30 years. This exercise also made students aware about the different challenges regarding their goals. 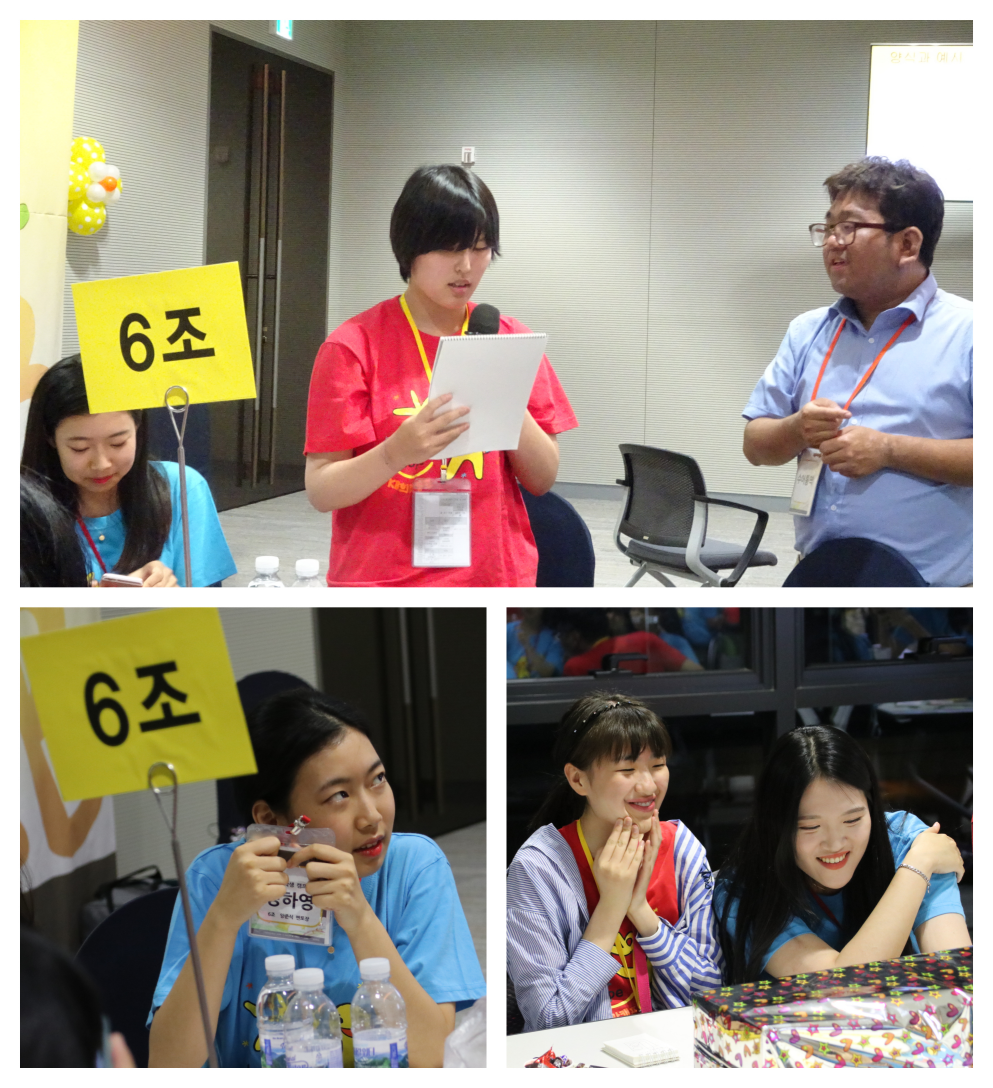 Like the day before, we did an introduction quiz game: make 4 sentences following 4 initial consonants.

Then, at 10 a.m. some groups dispatched in other rooms to do the activity: “Dream sculpture puzzle” (꿈 조각 퍼즐). I decided to follow the group 6 so that I could observe more easily how students with the mentor leader were working.

The mentor leader started to give the instructions and drew a kind of “tree of ideas” exposing in the center the “goal”, what is their dream job and connected elements which will help to reach this goal. Then, each duo mentee-mento had a blank puzzle on which they had to illustrate their ideas. But first of all, following the professor example they had to make their tree of ideas on a sheet of paper. Secondly, they had to sum up their ideas by writing and/or drawing their career goals (10 elements necessary for the rest of the pieces to fulfill the dream) on the white blank puzzle and decorate it in various ways.

The idea of a puzzle was one more time meaningful, as it showed that from one piece, one idea, we can build a final image, step by step, by assembling elements. And the final puzzle represents an achievement, the logical result of why we connected all the pieces together. It is another activity smartly chosen!

On top of that dispatching groups in different rooms made the exchange between mentors and mentees more personalized. They were highly encouraged to listen and support to each other, and I could really notice it.

After lunch at 1 p.m., students started “Breaking of career barriers!” (진로장벽 뽀개기!), an activity consisting in listing career barriers that students face in the process of establishing and following their goals. As a result, with this activity, they discovered that there were various solutions for each barrier factors.

Using post-it, students wrote down career barriers (at least 3) and solutions (as many as possible) to overcome it. Then, a time to present it (발표) in front of the other groups was dedicated. 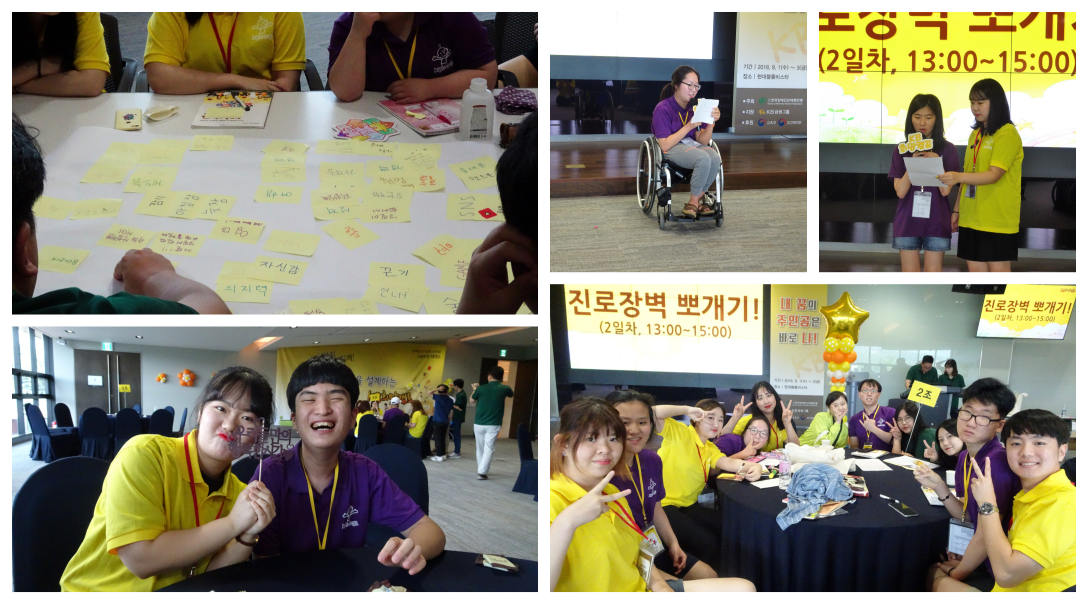 The next activity was “My personal strength shields” (나만의 강적 방패). Like the puzzle activity, another image was used to empower students’ ideas: a “shield of strengths”.

In each group, students made a round table to explain what are the barriers and solutions they thought about, holding a stuffed character when came their turn to speak. The second step for mentees was to think, with the support of mentors, about various strengths they have and make their own strong shield on a blank cardboard paper.

After, 15 minutes, it was time for the heart of the activity: The Group Project Mission (조별미션): Individual shields were collected by the mentor leader and the group thought about which strengths they could use to represent the group strengths. When students finished forming their strengths selection, they took a wide sheet of paper and started to create a giant shield gathering strengths of the entire group. They had to take into account the number and importance of the strengths. At the end it took the form of an armor one mentee had to wear and each group added its personal touch to it!

As a result, this activity aimed at improving positive thinking and self-esteem by overcoming and eliminating factors that disrupt career path implementation and search for their strengths. Every student was encouraged to participate in discussions. Moreover it requires also creativity as students had not only to write but to draw and make a unique shield, so that everyone can contribute to it.

The afternoon went on with the Super Star KB (슈퍼스타 KB) at 5 p.m. This activity gathered only mentees and consisted in expressing the hidden talents, imagination and the rapidity of the students. Thus, we had two rap performances, two k-pop dance performances and one voice imitation. There was a great enthusiasm from the mentees. They received small gifts when their performance was good. 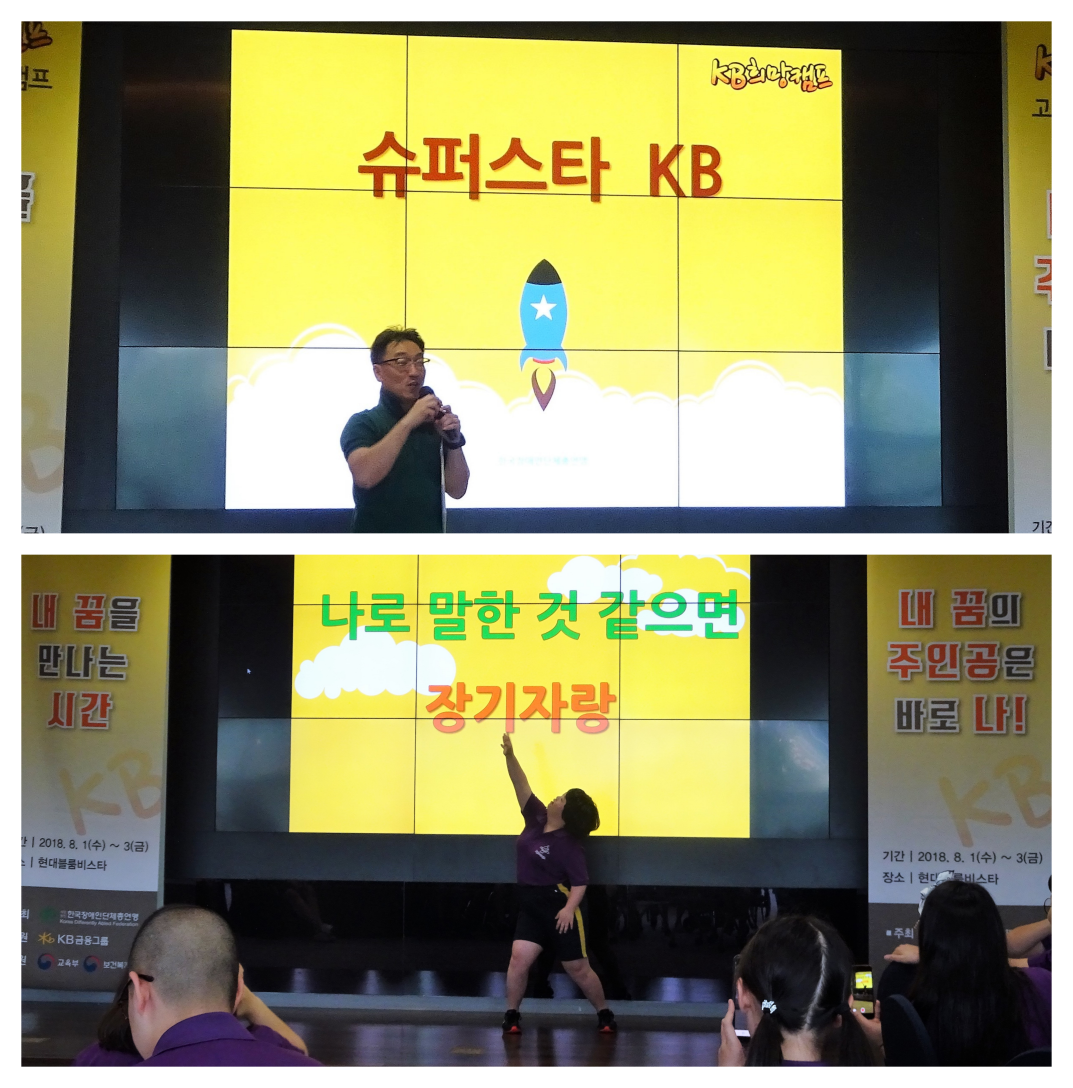 This recreation hour was also the opportunity for students to improve their concentration with games: initial consonant quiz, speed memory game etc. It also played a role in increasing the confidence of mentees to speak and express themselves in public, ask questions and play games together.

During the Super Star KB activity for mentees, there was also the Mentor Talk which gathered only mentors. The purpose was to set mentoring process direction, personalized to various level of mentee participating in the KB Hope Camp. This discussion allowed the mentors to share characteristics of mentees that they observed during the camp ((individual characteristics, characteristics depending on type of disability, career, program understanding, and difficulty in mentoring). The finality was to set directions for individual mentoring progress for all the groups.

The last activity of this second day, at 7 p.m, was entitled “Promise of my dream” (내 꿈의 공약).

Students had to clarify their career path realization and raise sense of achievement by writing the action plan that will be necessary to fulfill their dream by the end of the KB Hope Camp Program (December).

Indeed, students worry about what they can do in their daily lives to achieve their dreams. That’s why needed to prepare detailed action pledges and ways to realize them. Several examples were given to help the groups as goals and action plans to achieve it. Then, students had to write and complete a “one-line words” that express their will of the action plan in accordance with their pledge of action.

Eventually, based on the elements prepared, a presentation could be made as a 2 minute speech. On top of that, the challenge was to try to know the script by heart following the five skills up learnt throughout the program. To conclude this long day, students received a k-pop album of BTS! 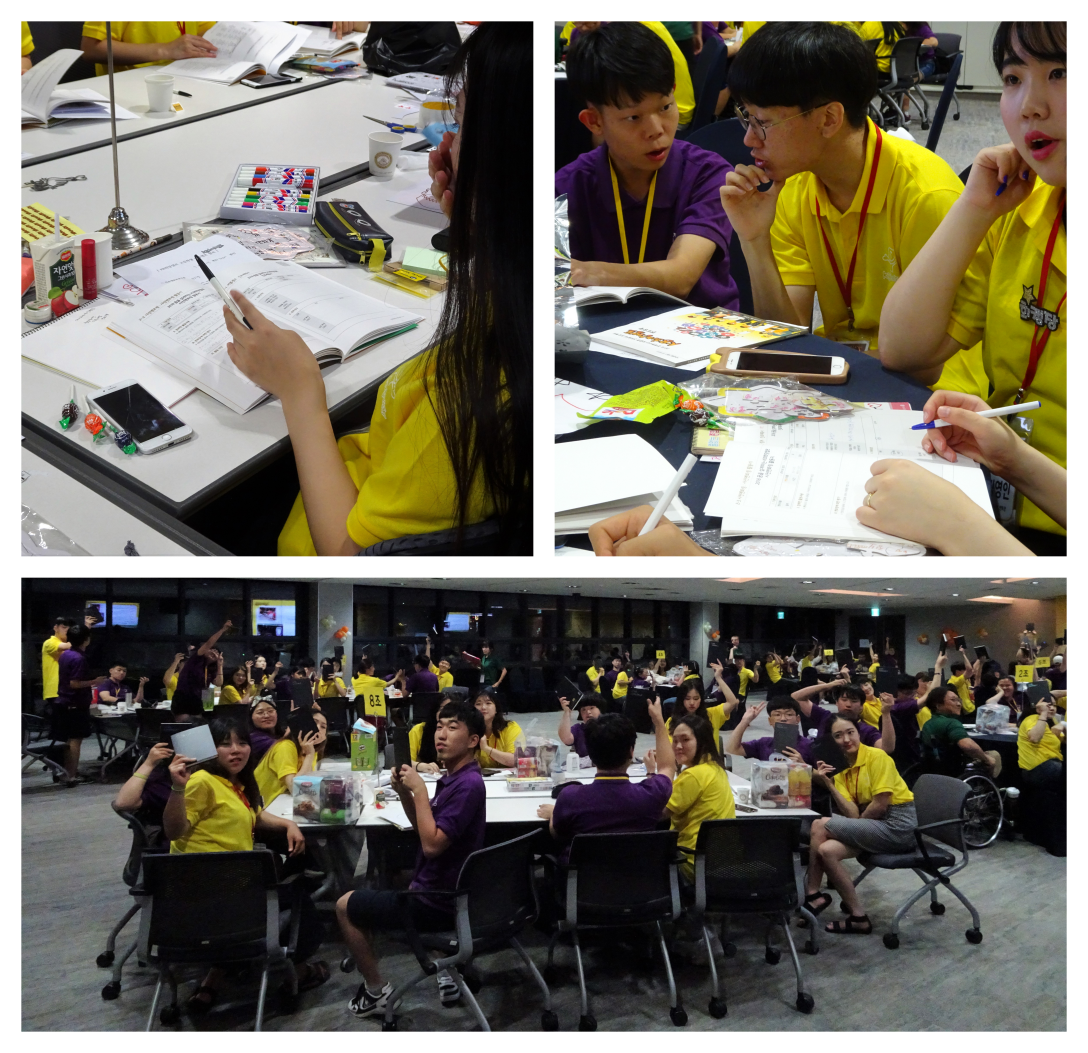 On the last day there was one main activity scheduled: “Action is my strength!” (실천은 나의 힘!).

As a conclusion of this 3 days program, the activity was focused on enhancing students’ speech skills by presenting their career action plan in front of a large audience.

For each mentee presentation on stage, his mentors had to film and share the performance on the BAND High School Camp group. The mentor also had to do a feedback to the mentee after his presentation. 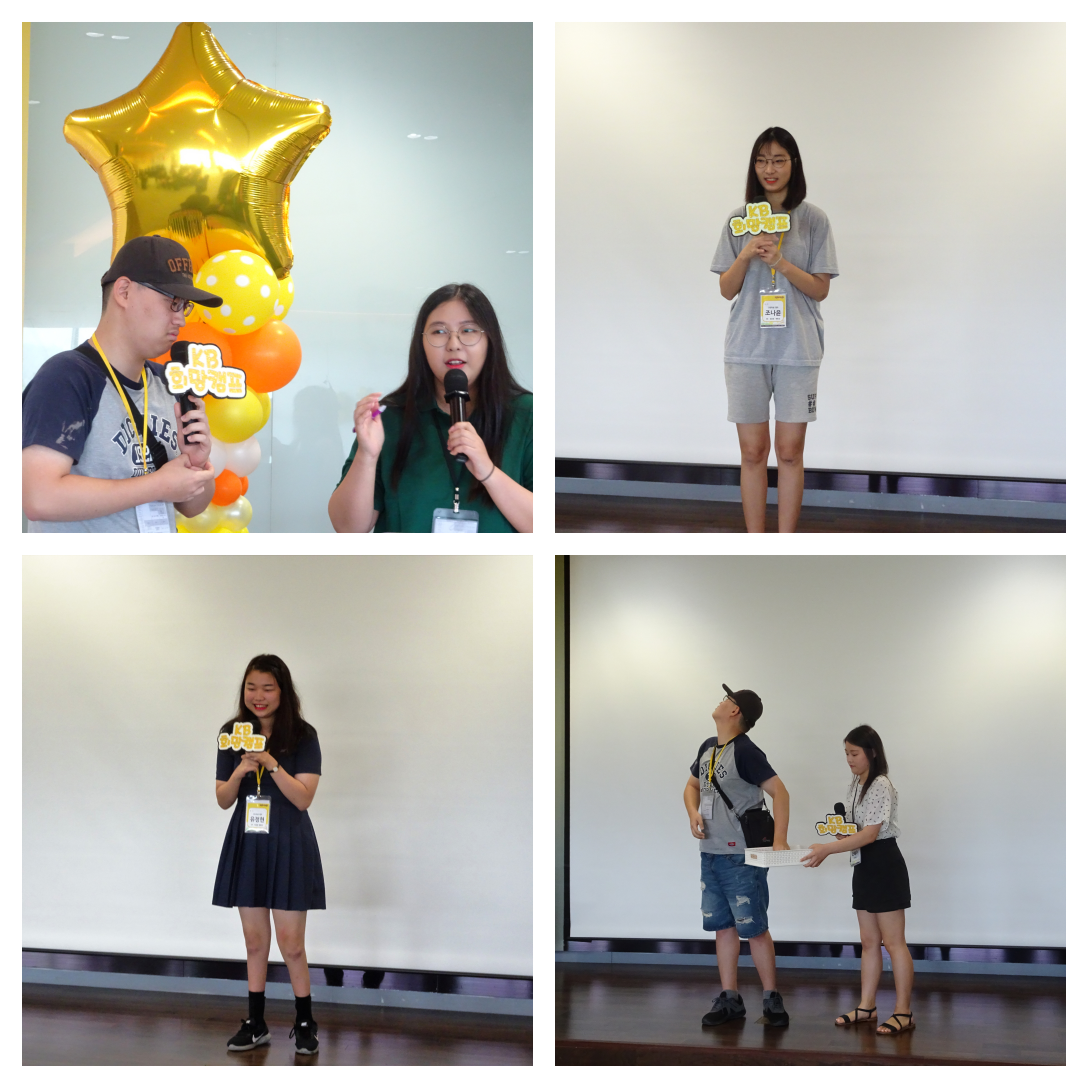 For this camp KODAF members and the mentors’ team made even more efforts to think and do activities that had originality.

It is no surprise that these 3 days were accompanied by a good atmosphere.

Furthermore, I was stunned by the talent of some students: I talked with a blind student who had a great level of English and was passionate about English teaching. During the “super Star KB” he imitated the voice-over announcing stations’ names in the subway, in all the languages: Korean, English, Chinese and Japanese. It was really impressive and unique.

Students were encouraged during the whole event to participate, share with others their stories which may have been a self-confidence booster.

Sharing also the different moments, photos, videos on the BAND app created a lot of cohesion between students during the event.

Thus, we can hope that the 3 initial objectives have been achieved:

Students may be ready to make the rest of the program a success! :)